Hurry Up with your Short Takes 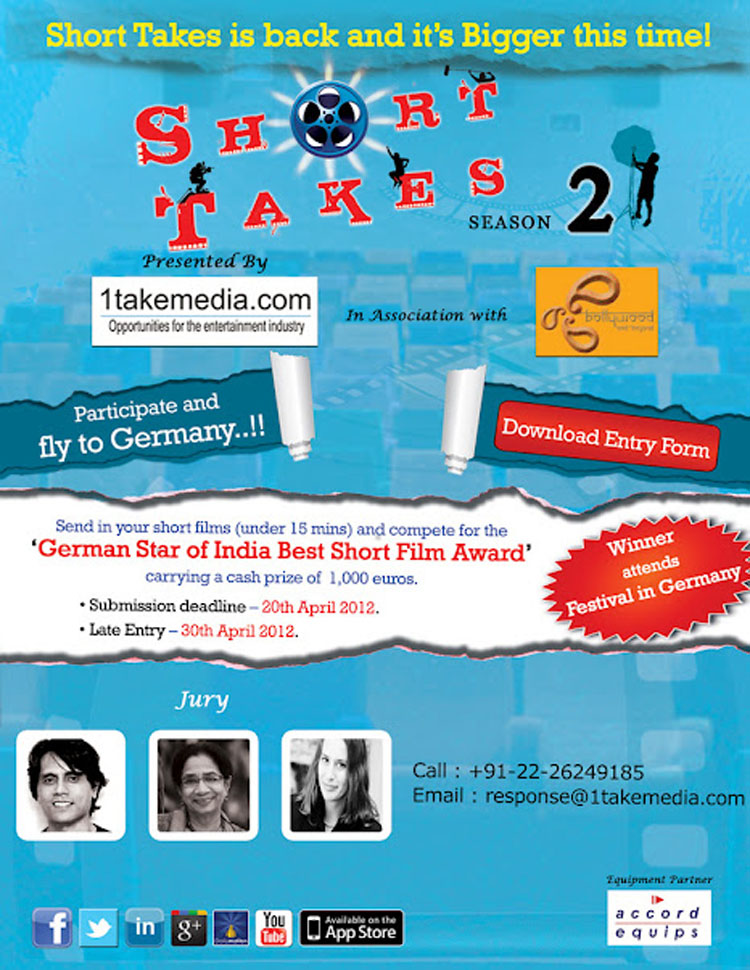 THE CONTENT:
1. This is a short film competition and hence ONLY Short Films should be submitted. NO
DOCUMENTARIES.
2. The films shall not be more than 15 minutes in duration, excluding the beginning and end
credits. Films exceeding this time limit are liable to be rejected. Please note the credits
should not be more than 45 seconds or 10% of the run time of the film, whichever is lower.
3. The film should have been completed after 1st July 2011.
4. The films may be in their original language but MUST be subtitled in ENGLISH. Films in
English language too should have subtitles in English. We recommend subtitles be submitted
in .srt format as far as possible and submit to us along with your film in a data dvd.
5. The films should not have been previously screened commercially in Germany nor available
on the internet prior to or till 24th July 2012.
6. Films submitted previously to this festival will not be considered for this contest.
7. The films may be shot in any format. However, the recommended ratios are: 16:9 / 16:9 Full
Height Anamorphic – in DV / HDV. The winning film will be called upon to submit a Digibeta or
Betacam latest by 15th June 2012.
8. The recommended video files formats are VOB, MPG, MPEG4 or AVI.
9. In making your Film, you must have (1) obtained appropriate releases for every person who
appears recognizably in your Film; (2) obtain appropriate releases for those locations that
appear recognizably in your film and require releases. You will retain any such releases and
provide them to the organisers upon request.
10. The Film must not contain any copyrighted works belonging to third parties unless (1) you
have a license to use such works in the Film; or (2) the use your Film makes of such works is
a fair one under the copyright laws. You will retain any licenses and provide them to
organisers upon request.